Degree from the Oriental Faculty of the State Leningrad’s University

She wrote her dissertation on traditional Turkmen carpet knotting as a historical source.

In 2002 she was employed at the Anthropological and Ethnographic Museum of the Russian Academy of Sciences (MAE). There she is the leading scientific specialist of the Department of South and Southwest Asia, director of the monthly textile seminar and curator of the exhibition on the Middle East and photo collections.

For years she has devoted herself to archaeological textiles from Eurasia with a focus on the origin and development of carpet knotting.

Since 1976 she has participated in the “International Conferences on Oriental Carpets” (ICOC), where she became a member in 1978 and now sits on the Academic Committee organizing conferences on textiles and clothing.

Since 1984, she has been the co-editor of the magazine “HALI”, which deals with carpets, textiles and Islamic art.

She is the author of many publications, lectures on the history of textile art, and exhibits on the culture of the people of Eurasia.

She also organizes and participates in archaeological and ethnographic exhibitions on Central Asia, Southern and Western Siberia and Eastern Europe.

Author of our publication: 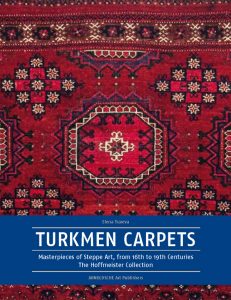