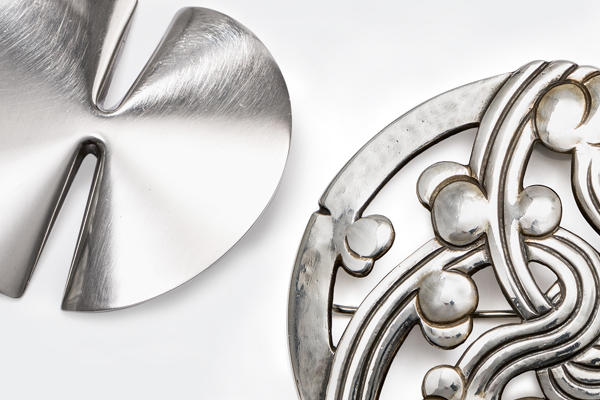 The successful exhibition on Danish silver jewellery, which had previously been shown at the GRASSI Museum Leipzig and the Bröhan Museum Berlin, is now on show at the Øregaard Museum, Hellerup. Various pieces of jewellery from the collection of Monika and Jörg Schwandt will be on display, enabling visitors to trace the development of silver design in Denmark. Thus the material value of jewellery recedes at the beginning of the 20th century (under the influence of the world wars and economic crises) and design becomes the decisive criterion for the only aesthetic evaluation of jewellery. At the beginning of the century, Danish jewellery design was still dominated by ornamental motifs inspired by nature, but modernism led to a departure from representationalism, with clear lines and geometric forms increasingly dominating the design. In the second half of the 20th century, the energetic play of light on the highly sculptural, decoration-free forms became the defining feature of Danish silver jewellery.

The collector and author Jörg Schwandt presented Simply Danish, a comprehensive and visually stunning publication on Danish silver in general, and on his outstanding collection in particular.